Events at the Estate
We are looking forward to your visit! 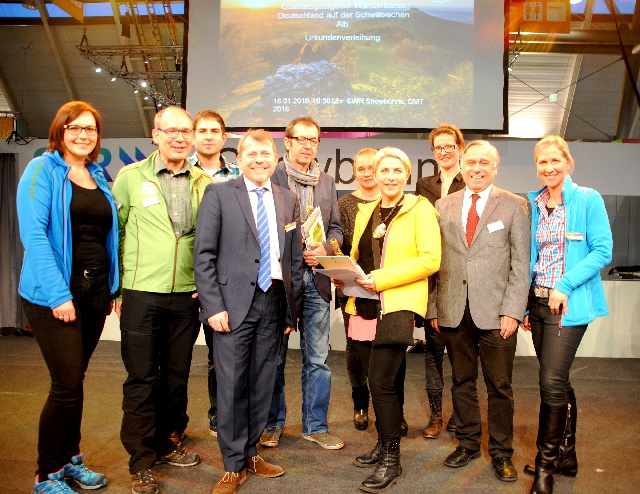 Dr. Hans-Ulrich Rauchfuss, the chairman of the German Hiking Association and the Swabian Alps Association, joined Mike Münzing, the chairman of the Swabian Alps Tourism Association to distribute the much sought-after seal of excellence to the “Landhaus Engel” hotel in Geislingen-Erlaheim and the “Alb-Castel” holiday guesthouse in Albstadt-Onstmettingen, who were winning the accolade for the first time. The “Landgut Untere Mühle” estate hotel in Straßberg, the “Ferienhaus Elise” holiday guesthouse in Albstadt-Truchtelfingen and the Traufganghütte hiking hut in Albstadt-Laufen all received certificates as they were once again recognised for their excellence.

Tanja Brichacek from the German Hiking Association and Silke Schwenk, the head of tourism for Zollernalb, were also present on the SWR stage to celebrate the awards. “This means that Zollernalb continues to boast the highest density of quality hosts in the Swabian Alps,” proudly explained Larissa Schwabenthan from the Zollernalb Tourist Information, which carries out the grading.

The pre-requisite for hotels’ participation in the certification process is their star rating from the German Hotel and Guesthouse Association (Deutscher Hotel- und Gaststättenverband, DEHOGA), while for holiday apartments and private rooms it is their star rating from the German Tourism Association (Deutscher Tourismusverband, DTV). To receive this seal of approval, certain criteria that are conceived specially for hikers must be fulfilled; these include e.g. a shuttle service to and from hiking trails, baggage transfers to hikers’ next accommodation, packed lunches or expert staff. The “Wanderbares Deutschland Quality Host” accolade is the only accreditation recognised throughout Germany for accommodation that is especially suitable for hikers, and such an accolade is justifiably sought-after, as only recognised quality hosts may feature on www.wanderbares-deutschland.de, Germany’s no. 1 easy-to-use hiking platform.

As there was only limited time and space on the SWR stage, only the companies that had achieved new certification or been re-certified in November and December 2015 received awards on behalf of all the Wanderbares Deutschland quality hosts.

Further information about certification and the Zollernalb showing at the CMT 2016 is available at www.zollernalb.com.